The Delaware State University women’s lacrosse team had their team bus searched by Georgia Sheriff deputies during a minor traffic stop on the way home from a game in Florida.

President of the Historically Black College and University (HCBU), Tony Allen, said in a statement that “law enforcement members [were] attempting to intimidate our student-athletes into confessing to possession of drugs and/or drug paraphernalia.”

The stop took place on April 20 as the team’s charter bus was traveling north from Florida through Liberty County, Georgia, just south of Savannah.

The bus driver was initially told that he was improperly traveling in the left lane, violating a state law that requires buses to drive in the two furthest right-hand lanes unless preparing for a left turn. He was ultimately issued a warning during the stop.

For the players and coaches, they felt the stop took a racial turn when a K-9 dog began sniffing the luggage area for drugs.

Officers entered the bus telling the HBCU players “If there is anything in y’all’s luggage, we’re probably gonna find it, OK? I’m not looking for a little bit of marijuana but I’m pretty sure you guys’ chaperones are probably gonna be disappointed in you if we find any.” 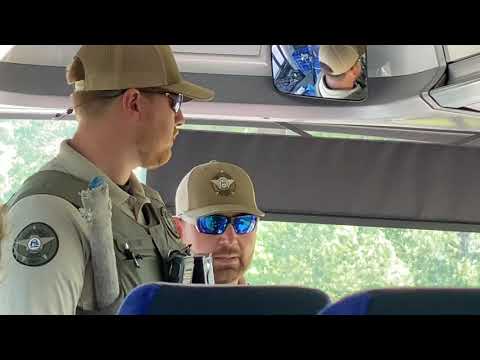 Nothing illegal was discovered.

Liberty County Sheriff William Bowman, who is Black, defended the stop after reviewing the video and said he “does not believe any racial profiling took place.”

“Before entering the motorcoach, the deputies were not aware that this school was historically Black or aware of the race or the occupants due to the height of the vehicle and tint of the windows,” Bowman said.

One of the HBCU student-athletes, Saniya Craft, is a relative of Elijah McClain, the young Black man who was killed by three White police officers in Aurora, Colorado after being put in a chokehold and being given 500 milligrams of ketamine to “calm him down”.

“As a family member of Elijah McClain, I’ve realized what happens when police take advantage of their privilege and compromise their job. After seeing the police brutally murder my relative, I was petrified for what would happen to my teammates and I. As women of color, we are constantly facing adversity and this was an incident we had to overcome together.”

President Allen said Delaware State University is exploring options for recourse, legal and otherwise, available to the student-athletes and coaches.