U.S. District Judge Roderick C. Young ruled that Nazario’s claims of unlawful seizure and excessive force would be allowed to move forward and put before a jury. Judge Young also ruled that federal qualified immunity shielded the two officers from facing claims that they violated Nazario’s right to free speech.

The lawsuit stems from a December 2020 traffic stop where Nazario drove to a well-lit gas station after a traffic stop was initiated in a poorly lit and dangerous stretch of highway.

“It appeared to Lt. Nazario that there was no good location in the immediate vicinity to stop safely. So, for the benefit of the officer’s safety and his own, Lt. Nazario continued slowly down US 460,” the lawsuit says. 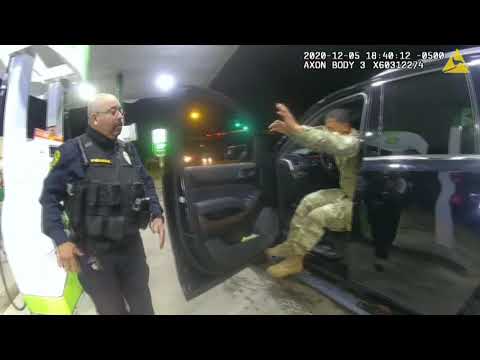 The officers approached Army Lieutenant Nazario’s vehicle with guns drawn. They screamed conflicting orders to keep his hands where they could see them and also to exit the vehicle. Lt. Nazario was wearing his seatbelt which would have required him to reach back in the vehicle in order to exit.

Former officer, Joe Gutierrez, threatened Lt. Nazario, with his gun drawn, that he was “fixing to ride the lightning son,” after the lieutenant said he was afraid to get out of the vehicle.

Almost two years to the day after the traffic stop, Virginia’s Attorney General filed a lawsuit against the town of Windsor after an investigation revealed “discriminatory and unconstitutional policing” practices by the police department.

The Attorney General, Mark Herring, said in a statement that “while our investigation was spurred by the egregious treatment against Lieutenant Nazario that we all saw in bodycam footage, we discovered that this incident was indicative of much larger problems within the department.”