Courtesy of The Root

Why are we still having the public charter school debate when the majority of Black students, who attend public charters, generally outperform their Black peers who are attending traditional public schools?

The day adults cut the red tape and yank the politics out of America’s educational debate and merely do what’s right — adequately fund America’s public schools and implement true racial equity for the nation’s Black students — will be the day that the tides will positively turn for every student in America, including the Black ones.

But presently, be they Black or White, America is still hellbent as to whether public charter schools are sufficient for Black students.

Susan M. Dynarski, a professor of education, public policy and economics at the University of Michigan, said in her New York Times editorial that,

“Rigorous research suggests that the answer is yes for an important, underserved group: low-income, nonwhite students in urban areas. These children tend to do better if enrolled in charter schools instead of traditional public schools.”

Now, critics will argue that charter schools are a pathway to resegregation in American  public schools — as if we haven’t seen white flight nor witnessed the biases against Black students when they seek more rigor in an Advanced Placement class, magnet school, or IVY league university.

Take for instance the former first lady’s experience. In her new book “Becoming Michelle,” Mrs. Obama revealed how her high school guidance counselor discouraged her from applying to Yale.

In high school, I remember inquiring about an advanced course only to be discouraged from entry.

Now, this isn’t an argument that points to this sort of behavior exclusively existing in traditional public schools. We know that racial biases and discrimination can be found in every American institution.

Nevertheless, what many fail to realize is that American schools are just as segregated today as they were during the Jim Crow era.

When analyzing the last half century’s SAT scores and reading comprehension, mathematical ability on standardize test between students’ racial groups, one can easily infer that Black students are consistently performing at the bottom of the barrel decade after decade with little changes to academic performance.

One can almost hear eugenists, like David Duke, adulterating this data to dehumanize Black people in the twenty-first century.

Moreover, low academic performance affects a Black student’s ability to enter into a public magnet school, a college without having to take remedial courses, or perform well on skill test that a particular job may require.

Year after year, I bear witness to the tears of Black families who receive a rejection letter from my city’s public magnet schools.

Henceforth, Black families understand the value of a quality education.

Black parents and educational advocates know that Black students are fully capable of excelling academically when provided the best circumstances.

However, does the American public school ‘system’ believe Black students — as a racial group — are capable of achieving academic success?

Consequently, the low, unsatisfactory academic performance of America’s Black students in most traditional American schools is the catalysts that fuels this rapidly generating migration of Black students from traditional schools to public charter schools.

Which points to the question: Are Black parents losing faith in America’s traditional public schools?

Today, a rapidly growing number of Black parents have a desire to send their children to public charters that focus on a holistic approach to their child’s educational needs. 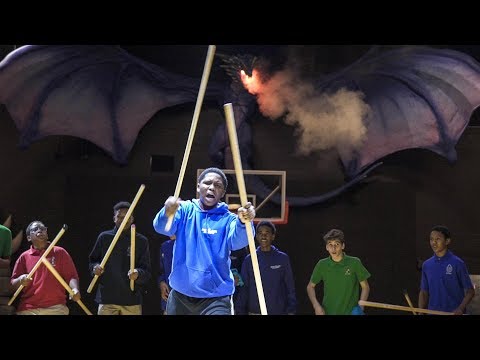 Unless you are a charter school parent, student, teacher, or school administrator, and an eyewitness — in a position to actually speak to the hard evidence that arguably says, public charter schools work just as well or in many cases better than traditional public schools — you’re not versed, enough, to engage in this debate.

Hence, it would behoove those individuals to sit down, listen, and focus on what charter school advocates and families across the nation are saying, especially the Black ones.

Whether these pro-public charter advocates and families are financially assisted by a philanthropist or scrapping-up pennies to put gas into their vehicles so they can make it to the next school board meeting or state capitol lobby day is besides the point; however, what they say is critical in the educational debate towards equity and high quality academic accessibility.

Because simultaneously as the Black Lives Matter movement sweeps the nation, challenging every American, no matter their race, on the value of Black life, a Black Educational Movement parallels that positive social friction.

And because like ‘Black Lives Matter,’ Black students are black lives; hence, investing in their lives from birth is vital for black children’s personal development, the wellbeing of their families and communities, and to this country.

Many anti-charter folks will in error take the ivory-tower, armchair, diluted, negative opinion from someone that hasn’t even taken the time to plant their feet into the soil of this critical issue nor have they worked in both of these urban settings — inner city traditional public schools and or public charters.

Moreover, like the majority of white middle-class Americans and those who had the financial means to flock from the inner city to suburbia to make ‘better’ schools during the 60s, 70s, and 80s, Black folks also equally deserve the option of choosing the best schools for their child today.

The public charter school campaign doesn’t call for the eradication of America’s public schools; it merely demands additional options, a choice, for the Black American students whose families may not have the financial means to relocate their children to a higher performing suburban school or private school in a wealthier zip code.

It’s as if we have forgotten that a significant portion of Black people living in America dwell near, at, or below the poverty line as a result of centuries of systemic racism in the form of institutional slavery, Jim Crow, redlining, and pay discrimination.

Furthermore, I have witnessed publicly in nearly every civic engagement that at the first spoken grammatically perceived error from a Black advocate at a microphone that the supremacy mindset invades and diseases any empathy left within the soul of those who are listening and holding power.

These elected officials then seemingly disregard any argument made from the Black advocate. I can only assume by their facial expressions, that they are marking unspoken judgments in their minds that the Black advocate speaking doesn’t possess the intelligence to decide what is best for their-self and their Black community.

That’s to say, how many elected officials thoughtfully take the daily concerns of poor  and working class Black people seriously?

The same behavior is demonstrated from those in opposition of public charter schools. They make the argument that wealthy foundations are using charter school advocates  and families to resegregate American schools, and their argument is a fallacy of division as opposed to focusing on what is best for Black who possess the most needs.

Finally moving forward and regardless of one’s political affiliation, history reveals that America has hardly given two cents about Black Voices.

Fannie Lou Hamer’s national testimony speech was abruptly stopped, due to a purportedly scheduled Presidential speech from Lyndon B. Johnson.

What’s important, however, is that we all recognize that the future of Black people’s ability to progress economically is heavily dependent upon our Black student’s capacity to perform academically well and understanding the role of culture in development is equally important.

Hence, we must invest heavily in public education, and the investment should be allocated based on the schools with vulnerable student populations and at low performing schools.

Nehemiah D. Frank is the Founder and Editor-in-Chief of The Black Wall Street Times. He graduated from Harold Washington College in Chicago, IL, and earned a Bachelor of Arts in political science at Oklahoma State University. Nehemiah is an Editorial Community Advisory Board Member at the Tulsa World, in Tulsa, Oklahoma and a Blogger for Education Post in Chicago, IL. He has been featured on NBC, Blavity, and Tulsa People. Nehemiah is also an Educator and Administrator at Sankofa School of the Performing Arts in Tulsa, OK, a 2017 Terence Crutcher Foundation honoree, a recipient of the 2017 METCares Foundation Community Impact Award, and TED Talk Alumni.