Mariah Mcswain thought she would take the expected route of attending college after she graduated from Southwest Oklahoma’s Lawton High School in 2011.

Yet, she’d spent much of her high school extracurricular activities making hip hop music as a rapper with other artists in the community—performing on stage, winning awards, and getting local radio plays of her music. And after nearly two years of college, she decided to return home to work full-time while pursuing a music career.

Hustling on two low-wage jobs, however, quickly took a toll on her.  Though she never stopped.

“I feel like high school doesn’t prepare you for life,” 25-year-old McSwain said. “College is expensive. It puts people into debt. And it shouldn’t make people feel like it’s the only way to be successful.”

Despite a population of barely 90,000 people, Lawton has a younger and higher share of black residents compared to Tulsa. And with a poverty rate sitting at roughly 19 percent, the Southwestern city’s share of poor residents is only one point shy of its Green Country counterpart.

McSwain began to work with and learn from “King Spencer,” a 24-year-old hip-hop music video producer with a large social media following.

He’s recently filmed music videos in more than 40 cities across the U.S. and runs a community program called the Tulsa Progression that organizes regular book club meetings in the community.

“Seeing somebody that can do that from Oklahoma inspired me to say I can do that too,” McSwain said.

Spencer, who also started by watching other artist entrepreneurs on YouTube, now works full-time as a videographer.

“I wasn’t exposed to any resources [from the City of Tulsa],” Spencer said. “Everything was trial and error.”

In Lawton, McSwain hopes to follow in his footsteps. She started making videos for free a couple of years ago to practice and spread her name. Then, every few months she would raise the price from $50 to $150, and $200, before settling at her current rate.

These days, McSwain works only one job outside of producing music videos. The rapper-turned-videographer has clients lining up weekly for her niche talent in a crowded field of underground artists seeking a platform to share their music.

“There’s people here who do it,” McSwain said. “But I don’t think there’s anyone here who wants to dedicate their time to it completely as a full-time job. And that’s what I want to bring to Lawton.”

Unapologetic about her female gender in a predominantly male field, McSwain said it throws some clients off guard, but she doesn’t let it bother her.

“I’m just somebody who has a passion for music,” McSwain said. “I’m just doing it.”

Beyond music, McSwain recently became a community leader after organizing a peaceful gathering of Nipsy Hussle supporters who mourned his recent passing with a balloon release at Lawton’s Elmer Thomas Park on Sunday, April 7.

Hussle was a famous and inspirational rapper who dedicated his life to uplifting his Crenshaw community. He was shot dead outside his Crenshaw clothing store. Local police believe a possible rival named Eric Holder, who is in custody, allegedly shot him several times in the torso and once in the head.

“I truly wanna thank everyone who came out to support the movement today,” McSwain said in a Facebook post. “I feel my name holds enough weight in the town now where I could bring people together on more occasions other than tragic ones. I appreciate each and every one of you. Let’s continue.”

With where she comes from and where she wants to go firmly entrenched in her mind, McSwain said she would like to see more resources for skills training in high school.

“High school should prepare you for life, not just college,” McSwain said. 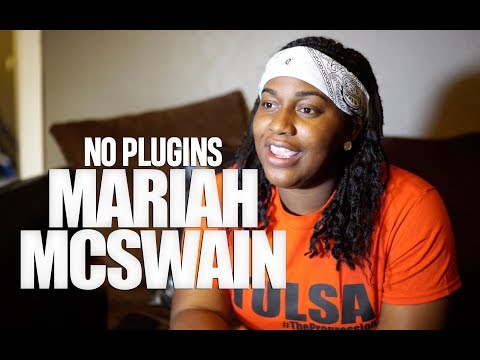 Deon Osborne was born in Minneapolis, MN and raised in Lawton, OK before moving to Norman where he attended the University of Oklahoma. He graduated with a bachelor’s degree in Strategic Media and has written for OU’s student newspaper the OU Daily as well as OKC-based Red Dirt Report. He now lives in Tulsa, where he works at a local youth shelter. He is also a former intern at Oklahoma Policy Institute.