Lailah Danzy, 9, and Noah Davison, 8, are on the path to athletics success. They are athletes at Pride Gymnastics Academy in Tulsa, Oklahoma and they’re both amazing.

TULSA, Okla. — When you walk into Maria Fernadez’s athletic facility, Pride Gymnastics Academy, off 61st and Mingo, the smell of chalk and hard work coupled with the sound of springs and swings fill the air.

Gym moms sit in the lobby, patiently waiting and watching some of gymnastics’ best coaches in the nation train their kids.

Maria takes ‘pride’ in every kid that walks through her doors.

As you walk deeper into this space where dreams are created and where grit and preparation lead to rewarding outcomes, you encounter a wall of fame — filled with the academy’s talented competitive athletes.

Among them, two short, but mighty athletes stand out — Lailah Danzy and Noah Davison. Currently towering under five feet, show a unique and keen level of focus, discipline, and natural talent in the sport of gymnastics at an early age.

When you pack on excellent and well-studied gymnastics coaches, who wholeheartedly love building the self-esteem in kids and a great training facility, you develop the conditions where magic happens.

And magic is what’s occurring at Pride Gymnastics in Tulsa, Oklahoma.

Lailah, age 9, is already training the type of skills that you’d see in the summer Olympics. She began gymnastics 6 years ago when her mom enrolled her in a mom and tot gymnastics class.

Lailah says, her favorite event is the floor exercise.

“I get to express myself through dance,” she explained and added with a smile, “And I really really love to dance.”

Her new floor routine is intricate, full of sophisticated leaps and bounds, flips and turns to the motion picture soundtrack of Creed. Her most difficult passes include a double-back tuck, double-full twist, and a back half twist punch front layout.

Lailah recently began working on a two and a half twist, which was the all-round Olympic gold medalist’s, Nastia Lukin, final pass at the 2008 Beijing Summer Olympic Games in China.

To pack on her impressiveness, at a recent high-performance gymnastics camp, Lailah trained and successfully completed a yurchenko double-full twist into a foam pit. That’s only half a twist less than what gymnastics’ reigning queen Simone Biles competed at the 2016 Rio de Janeiro Olympic Games.

“The hardest skill I’m working on is my series on beam,” which she flawlessly trained during her interview.

Lailah says she hopes to become an Olympic athlete someday. And if that’s her greatest ambition, she’s in good hands.

Her team coaches, Jeff Becker, and Nikki Pindroh have studied under some of the best coaches in the history of the sport. They were also athletes themselves and understand the mental toughness and physical requirements to reach success in the sport. Coach Jeff was even a national team athlete and had several athletes earn athletic scholarships to top universities and spots on the national team in the past.

Lailah has been training with Jeff and Nikki for nearly five years and credits them for her success in gymnastics.

Lailah loves her coaches and gymnastics. “What I like about my coaches is even when I’m not training well, they still push me to do my best,” she explained.

Lailah and teammate Abby Schmitz in Indianapolis, IN after their induction into USA Gymnastics’ Talented Opportunity Program (TOPs)

In 2018, Lailah, became a TOP’s National Qualifier, along with her teammate and friend Abby Schmitz. Abby also trains at Pride. Lailah was 8-years-old at the time and Abby 9-years-old. Both girls were the only athletes in the state of Oklahoma to qualify for TOPs.

Abby Schmitz said she likes training with Lailah because they encourage one another to be greater.

“I like the support of having someone like Lailah to train with. When one of us messes up, we can push each other to keep going. We push each other every day and try to make each other better,” Abby said.

To put the cherry on top of Lailah’s success, she is the 2019 Regional 3 Gymnastics Champion for Level 7. If you don’t think that’s a big deal, think again. Region 3 comprises of Arkansans, Colorado, Kansas, New Mexico, Oklahoma, Texas, and Wyoming, and she was number one. She earned gold medals in 3 out of the 4 events she competed, including an additional gold medal for the all-around title. That’s 4 gold medals at a regional championship that includes athletes competing from 6 other states.

The 9-year-old thoroughly enjoys the many trips that being gymnast affords her. “I like the traveling part of the sport. Sometimes we get to go to amusement parks. The furthest place I’ve traveled is Indianapolis, IN for TOPs.”

“Gymnastics has helped me focus a lot more in life. I’m a better student at school because of the focusing I’ve learned from my coaches in gymnastics.” Lailah usually earns high scores in gymnastics, and likewise, she’s also excellent student in school. 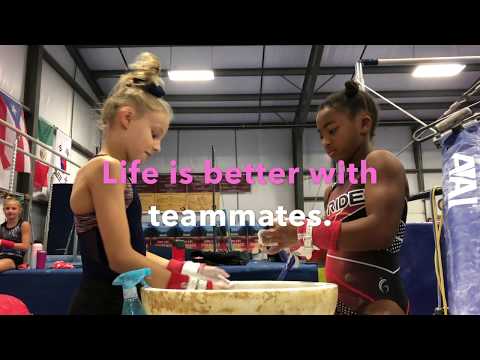 Maria says she immediately noticed Noah’s natural ability for the sport when he walked into Pride Gymnastics a year and a half ago. He was in a recreational class, and Maria happened to be standing in as a substitute for one of her rec coaches. She immediately notified her head coach David Finning of Noah’s natural talents. Coach David and Maria recommended that Noah be placed on team. After the rec class, Noah told his mother that he wanted to do the sport for the rest of his life.

Since officially joining the sport as a competitor, he’s seen much success. Noah is Oklahoma’s 2019 Boys Gymnastics All-Around Champion for level 5 and is currently training in the USA Gymnastics’ Future Stars Program, a national development team consisting of six age groups: 8-year-olds, 9-year-olds, 10-year-olds, 11-year-olds, 12-year-olds, and 13-year-olds, who perform selected skills and compulsory routines on the six men’s events plus trampoline, strength and flexibility evaluations.

“The Future Stars program was created to find amazing talent at a young age. Once they reach ten years old, then, they can try out for the national team. Once they make the national team, their gymnastics is funded. He’s got a couple of years but to get started this young means that he’s got a lot of potential,” Coach Finning shared.

Noah is definitely on the right track.

Out of the six men’s events, Noah says his favorite event is Rings. Coach David said the US national team could us more athletes who specialize in Rings.

“I get to do a lot of skills on the rings. I get to do in-locate, locate — which, basically, you swing, and then you go all the way over the rings,” Noah explained.

“The hardest event for me is the pommel horse,” which is interesting because he showed no trouble when demonstrating the skills he’s learned from Coach Finning on the pommel mushroom.

“You have to go all the way around the mushroom with straight legs, straight body, pointed feet,” he added, “I can do 40 circles.” He demonstrated circles around the pommel horse nonstop for 20 seconds without stopping.

Noah says he’s not afraid of flipping upside down, high in the air.

“It’s fun, and it feels like you’re doing giants,” another gymnastics skill — when your body swings all the way around the high bar — another event within the sport of men’s gymnastics.

Like Lailah, Noah enjoys the traveling part of the sport.

When asked if he has aspirations to attend the Olympics and college, Noah said that he’d like to compete in both. He already has his college picked, the University of Oklahoma, and he’s already on track to compete in college and a shot at trying out for the Olympics because of USA Gymnastics Future Stars Program and Coach Finning.

Nehemiah D. Frank is the Founder and Editor-in-Chief of The Black Wall Street Times, an educator, TEDx alum, blogger for EdPost, and Community Advisory Board Member for the Tulsa World.