Three months after killing Zonterius Johnson at his 24th birthday party, Lawton police released bodycam footage, along with a statement from the district attorney clearing the officer of any charges.

In the footage, Officer Ronan repeatedly yelled for Mr. Johnson to stop as he is chased onto Tenth Street. As he catches up to Mr. Johnson, the officer yells, “You better stop.”

Mr. Johnson then stopped and turned around as the officer aimed his flashlight at Mr. Johnson. Mr. Johnson appeared to freeze momentarily as he held something in his waist and paused.

“You better f—ing stop. Drop that,” Officer Ronan yelled. Mr. Johnson then attempted to remove the object from his waist as the officer fired four shots. Two shots hit Mr. Johnson’s chest and one hit his foot. While grainy, the footage did not appear to show Johnson lifting his weapon to aim. But the footage does show Mr. Johnson running away, and that the officers discovered a weapon on the scene, adding to the defense that the officer made a split-second decision.

“Officers immediately rendered medical aid to Mr. Johnson, and he was transported to Comanche County Memorial Hospital, where he succumbed to his injuries,” the report said.

Meanwhile, Mr. Johnson’s mother released a clip of the shooting on her Facebook page Monday morning, with the caption “This is a set up. They killed my son!” The Lawton Police Department eventually released their footage of the killing. 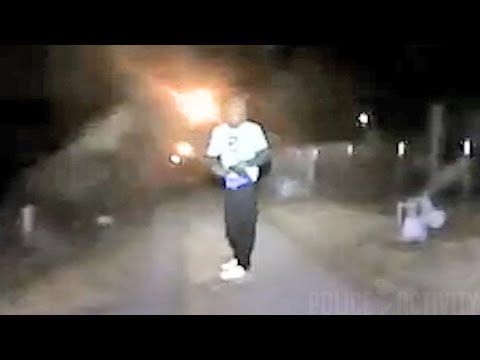 Zonterius Johnson’s mother, Meyoshia Gray, feels LPD has been deceptive with the release of information. Specifically, she claims the full video has been edited.

“Zon did not point a gun, which they say he did,” Johnson’s mom said. To be clear, the first report from LPD back in January clearly stated that “when the officer encountered Zonterius Johnson, Zonterius Johnson drew that weapon.” Yet in the grainy video, it isn’t clear whether Johnson was raising a weapon or reaching to remove it from his waist. While it’s impossible to determine what was going through Johnson’s mind, his mother isn’t satisfied with the facts as they’ve been presented.

“[The report] clearly stated Zon was being shot at and running for his life and the officers seen that. The officer seen he messed up, but his superior won’t make them stand accountable. I want the world to see how they killed my first born.”

The police chief’s report confirmed that OSBI forensic evidence found Johnson’s fingerprints on a Taurus 9mm gun found at the scene. The gun was reportedly purchased by a relative of Darezanae Porter, Johnson’s girlfriend. The report also confirmed that an investigation into the individual who was shooting at Mr. Johnson that night is still ongoing.