The largest single collection of Black History, owned by a former history teacher, is set to go up for auction next week in New York City.

Elizabeth Meaders has been collecting artifacts for over six decades, some dating all the way back to slavery.

“African American history has been completely ignored. It’s been left out of the curriculum of United States history,” Meaders told ABC7 in 2019. 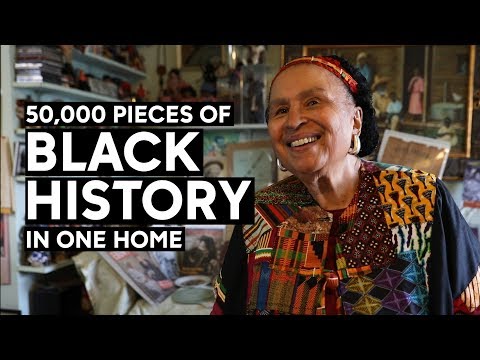 “Crammed into this simple home is a collection that tells the whole saga of African American history, from the scourge of slavery to the struggle of civil rights, to Black soldiers in all of our wars from the Revolution through Vietnam,” Arlan Ettinger, president of Guernsey’s, told the Times.

Guernsey’s is the auction house set to host the auction of The Elizabeth Meaders Collection.

“I’m a descendant of the last slave to be freed on Staten Island, we have a middle school named in honor of my grandfather, a school where I taught for a while,” Meaders recalls.

The New York Times reported on some of the items in Meaders’ collection;

In the room by her front door, an exhibit of military items used by Black soldiers includes headgear worn by Tuskegee Airmen in World War II and a parade helmet used by the famed buffalo soldiers in the 1800s.

In the living room, the couch is flanked by a life-size wax figure of the baseball slugger Hank Aaron and shelves of items honoring Black athletes, including a pair of Muhammad Ali’s tall white boxing shoes…

There is a Ku Klux Klan grand dragon robe and a K.K.K. brand water pistol for children. Next to the boiler are posters from Harlem’s famous Apollo Theater and a rocking chair that belonged to the pitcher Satchel Paige.

Nearby is a golf bag that belonged to the pioneer Black golfer Charlie Sifford.

“A month is not enough,” Meaders said. “Our contribution is so much larger than a month.”

Museums and universities are expected to be among the leading bidders for the collection, which at least one expert has appraised at $10 million.

“America is somewhat handicapped if it doesn’t fully embrace all of its people—and in doing that, you embrace all of their history, and it glorifies us all,” Meaders said.

The auction of the Elizabeth Meaders Black History collection will take place on March 15 at 2 p.m. at Guernsey’s Auction House.