Skip to content
Home » Joshua Harris-Till, cousin of Emmett Till, running for Congress in Oklahoma

With proven experience as a community organizer on the local, state and national level, Democrat Joshua Harris-Till is jumping into the race for U.S. Congress.

Harris-Till, a cousin of the late Emmett Till, whose gruesome murder in 1955 sparked the Civil Rights Movement, looks to prove that a Black Democrat from Oklahoma can be elected to one of the nation’s highest offices.

A former president of the Young Democrats of America, Harris-Till, 32, is running with an unapologetic goal to provide representation and resources for Oklahomans of the Fifth Congressional District.

On the local level he helped to connect OKC Mayor David Holt with Black Lives Matter protesters in an attempt to foster understanding during the 2020 national uprisings.

On the state level he helped connect the family of former death row detainee Julius Jones with legislators supportive of his innocence. And on the national level, he advocated for the passage of the Emmett Till AntiLynching Act.

“A lot of this is personal to me. My politics doesn’t come from a place of me thinking that I know things better or hoping that I have the answers. It’s being in situations where legislation has affected me personally,” candidate Joshua Harris-Till said in an interview with The Black Wall Street Times.

Today I shared words during the #JusticeForEmmettTill press conference. We delivered over 400,000 signatures to the attorney generals office thanks to the collective efforts of @MoveOn and @dailykos under the direction of the @EmmettTill foundation pic.twitter.com/c6e27yAgxc

From health care and gun reform to economic opportunities and racial equity, Harris-Till said his own lived experiences have perfectly prepared him for the post of U.S. Congressman. Previously, he’s worked for former U.S. Rep. Dan Boren. His experience working on state, tribal and national campaigns will surely be tested as his campaign seeks to fend off attacks from conservatives.

Meanwhile, Harris-Till’s entrance into the race comes weeks after former OK CD-5 candidate Abby Broyles made national headlines due to a drunken rant at a children’s slumber party in which she used racial slurs while under the influence.

First reported by online news outlet NonDoc, Broyles faced widespread calls to resign after she acted inappropriately at the home of a donor, lied about her actions to media outlets, then threatened to sue NonDoc. It caused many to wonder who else is running for Congress in Oklahoma.

On Thursday, March 24 Broyles announced an end to her campaign in a Medium post, weeks after Oklahoma Democratic Party Chairwoman Alicia Andrews announced the party was seeking new candidates.

Yet, Harris-Till said he’s been considering running for months. Black Democrats around the nation from Oklahoma to Georgia have faced criticisms of being unelectable, but Joshua Harris-Till doesn’t buy into that, partly because he’s already ran before.

“In 2016, I was the top Democratic vote getter in the state,” he said about his unsuccessful race for Oklahoma’s 2nd Congressional District. He said when you have real conversations people relate to you.

From working in sandblasting, to working for national campaigns, Joshua Harris-Till said he’s never too good to do anything and believes his upbringing in a low-income household makes him relatable to the people he’s seeking to represent.

“It’s a servant’s role when you do it right,” he said.

A Democrat hasn’t represented Oklahoma in Congress since Kendra Horn was ousted by Republican Stephanie Bice in 2020. As Kendra Horn looks to take over the seat of retiring Senator Jim Inhofe (R-OK), Joshua Harris-Till says he’s prepared to challenge Bice for the 5th District.

While some have accused Rep. Bice of becoming right-wing in order to appeal to Trump supporters, Harris-Till said he has no plans to cater his platform to fit a narrative. He says the voices from the community, along with his lived experiences, will guide him instead.

For instance, when it comes to health care, Joshua Harris-Till said he knows all too well the pitfalls of having to choose between keeping a job or receiving crucial treatment.

“When my mom got cancer, she lost her job because she couldn’t work. And it was the Affordable Care Act, and the fact that preexisting conditions didn’t prohibit her from being insured, that she was able to actually continue on with her same doctor.”

While conservatives continue to use “Obamacare” as a negative talking point, Harris-Till said, for his mother, “that was her reality.”

An advocate for gun safety and gun rights

Another issue Joshua Harris-Till doesn’t plan to shy away from is gun reform. Previously, he’s worked closely with the advocacy group Moms Demand Action to push legislators to rescind laws making it easier for gun deaths to occur.

Again, it’s personal for him. He said he lost his sister to gun violence after law laws allowed a man with a history of domestic violence and severe mental health challenges to obtain a gun.

“My two little brothers were 13 and 10 when they felt a bullet in their little bodies, and my three-year-old nephew witnessed it all,” Harris-Till told The Black Wall Street Times.

But he said that doesn’t mean you have to be against guns.

“I’m a gun owner. But the reality is I’m responsible with my guns. People out there who have guns should also be responsible.”

He also views job opportunities as an important issue that needs improvement in the state.

“When I graduated from college, I applied for 87 jobs in the first three months and didn’t get a call back, not one.”

Harris-Till said whether someone is a college student or master of a trade, they shouldn’t have to leave the state to find a dignified, good paying job.

“People are living paycheck to paycheck and that’s a problem,” Harris-Till said.

He said Oklahoma needs a representative who won’t just go to D.C. fundraisers and forget about their constituents.

“We need somebody who will come back home, talk to people, foster those relationships and take those points back to D.C. and say, ‘hey, this is what my district wants’,” Harris-Till said.

Not worried about racist attacks

Any Oklahoman who’s attended a Black Lives Matter rally in OKC or Tulsa has probably seen Joshua Harris-Till. But he said he’s not worried about right-wing attacks associating him with the movement.

“My family’s history is deeply rooted in the Civil Rights Movement. My cousin being Emmett Till, Mamie Till being really one of the catalysts of the movement when she decides to open up that casket and show the world how ugly the sin of racism is. I can’t run from that, and I have no intention to,” Joshua Harris-Till told The Black Wall Street Times.

“Yes, I’ve been at the protests and yes I’ll continue to be at the protests after I’m elected because those people in those moments are crying out for help. And if the representation isn’t willing to listen to them then what are we doing to better the situation?”

“When we brought him down there he stood there and he listened to the stories and it was one of the most impactful events,” Harris-Till said. Despite the two previous nights being full of tense interactions between residents and police, that night was different.

“That night he lifted the curfew himself. He stayed out there and had conversations for over two hours with protesters. Everybody went home peacefully that night,” Harris-Till said.

“When you get past the talking points of “woke culture” or liberal vs conservative, you have real people with real issues who want to be heard,” Harris-Till added.

Still, Harris-Till was honest about some of the issues he has with Black Lives Matter the organization.

“It’s become very political and they have platform pieces and some of those things I agree with and some of them I don’t. But the reality of the sentence and the words ‘Black lives matter’, that is always going to be a constant for me,” he said.

Ultimately, Joshua Harris-Till faces an uphill battle as any Democrat would face in an Oklahoma statewide election. Republicans will undoubtedly label him as a left-wing radical, as has become their tactic for any Democrat running on a progressive platform. Harris-Till isn’t worried.

For instance, while conservatives like Rep. Stephanie Bice call for cutting the red tape around business regulations as a way to expand economic opportunity, Harris-Till believes we should be instead loosening the reins on social service spending.

“When we invest in people being able to contribute to society, then they contribute,” Harris-Till said. Highlighting the millions of dollars worth of tax breaks to large companies and the billions in aid dished out to Ukraine, he said the money is there to do more for Oklahomans.

“The money isn’t the issue. How we spend the money has always been the issue, and our unwillingness to bet on everyday, average Americans to do the right thing is why we’re in so many of these issues.”

Ready to work across the aisle

Lastly, if elected, Joshua Harris-Till said he wouldn’t have a problem working across the aisle. He praised conversations he’s had with Oklahoma Congressmen Tom Cole and Frank Lucas, calling them “genuine” despite their vast political differences.

“I’ve been working with Congressional members for years now,” Harris-Till said. “There’s connections there that are ready to go. I’m not starting bright-eyed and bushy-tailed trying to figure out how to make things work.”

He said a lot of Republicans are actually reasonable and want to have serious discussions, but they’re under a lot of pressure to change who they are.

“Stephanie Bice used to be a very moderate legislator, used to be very reasonable. And because she heard she had to be more Trump-like in order to get elected, that’s what she did,” Harris-Till said. 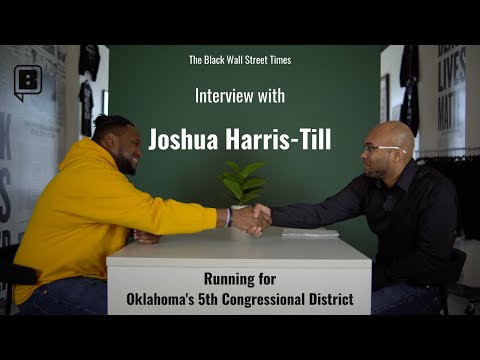 7 replies on “Joshua Harris-Till, cousin of Emmett Till, running for Congress in Oklahoma”