A growing trend with police departments across the country involves officers playing copyrighted music when they know they are being recorded by bystanders so that the video will likely be taken down if posted online.

A recent video of Santa Ana City Council-member Johnathan Ryan Hernandez confronting police in his district has been viewed by almost 200,000 on the YouTube channel Santa Ana Audits. The channel is dedicated to filming interactions with Santa Ana Police. 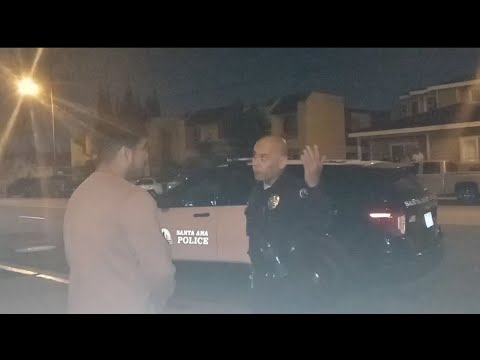 The Council-member said he was home at 11 p.m. on April 4, when he said he heard loud Disney songs being played over a P.A. system. After about an hour and a half he said he went outside to find out where the music was coming from.

“Guys, what’s going on with the music?” Hernandez asked an officer blasting the music. “Why are you playing Disney music?”

The officer looks at the person recording the video and mentions something about “copyright infringement.”

Realizing he was talking to a city council-member, the officer then apologized to Hernandez and then to the person recording the video.

“Have some respect for my community,” Hernandez said.

On Tuesday, Hernandez said at a City Council meeting that he wants lawmakers to ban the practice.

“This is a practice that no officer should engage in. There’s no reason to ever behave this way with members of the public, especially if you’re an officer with a badge and a gun,” he said.

“The practice of utilizing music to deter members of the public from recording (police) isn’t something we’re going to allow to continue,” he added.

“What bothers me most about this practice is that we’re trying to build trust with the community,” said Mayor Vicente Sarmiento. “We’re trying to establish this relationship where we say, ‘When you see something, say something.’ Well, sometimes, all you can say is to videotape something or to document something.  And this really chills that sort of activity.”

No bill has been introduced yet to ban this police practice.