The son of actress Angela Bassett has issued an apology after receiving swift backlash for a TikTok of himself telling his parents that actor Michael B. Jordan had died.

The video, which he’s since removed, doesn’t show what Bassett’s reaction was after learning she was pranked, yet, his triggering prank clearly took his mother’s breath away in the moment. 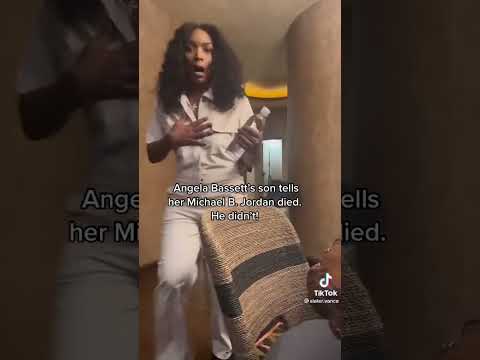 “I would sincerely like to apologize to Michael B. Jordan’s entire family, his extended family, and him directly as he is an idol of mine,” Slater Vance said in a video apology on his Instagram account.

“Taking part in a trend like this is completely disrespectful. I don’t wish any bad ramifications of this of my actions upon his family nor my parents as they deserve none of the backlash,” Vance said.

The younger Vance’s prank was part of a viral Tik Tok trend where users lie about celebrity deaths to their parents to see their reaction.

The TikTok prank was particularly insensitive, considering his mother recently grieved the death of King T’Challa on-screen after visiting the grave of Chadwick Boseman off-screen; Bassett was incredulous before the video was stopped.

TikTok trends are more dangerous than other platforms

While some challenges may come with obvious injuries such as “the milk crate challenge,” last year, health experts were warning against the more controversial #SunburntChallenge trend on Tiktok, which saw an alarming number of people using sunbeds to get a tan, unaware that they’re some of the biggest culprits of melanoma, a deadly form of skin cancer.

According to CBS News, thousands of Kia and Hyundai owners have lost their cars in Chicago and other U.S. cities thanks in part to TikTok videos that show how to exploit a hack on certain models that lack engine immobilizers.

Recently, experts have raised concerns about ‘Lion Diet’ trend taking Tiktok by storm, labeling it ‘extreme’ and ‘unsustainable.’ Called by many as the ‘healing elimination diet,’ the diet comprises eating nothing but meat, salt, and water for 30 days.

In 2022, despite medical warnings, some people swore by what seemed to be a simple solution to asleep apena on TikTok: taping their mouth shut. “If you have obstructive sleep apnea, yes, this can be very dangerous,” sleep specialist Dr. Raj Dasgupta, an associate professor of clinical medicine at the University of Southern California’s Keck School of Medicine, told CNN in October. When it first started, at least 82 youths had died from attempting the challenge, according to the Centers for Disease Control and Prevention (CDC).

Teens have participated in the #orbeezchallenge, which involves filling a toy gun with water beads. In some cases, these water beads are frozen to make them harder and more painful when they come in contact with one’s skin.

TikTok remains a hub where menacing imaginations, unproven theories and life hacks are leading to more death — real or fake — by the day.