Skip to content
Home » PBS Releases Trailer – Tulsa: The Fire and the Forgotten, Premiering Monday, May 31

Produced and directed by Jonathan Silvers, new documentary explores the 1921 tragedy, the history of anti-Black violence and Black resilience on the 100th anniversary of the Tulsa Race Massacre 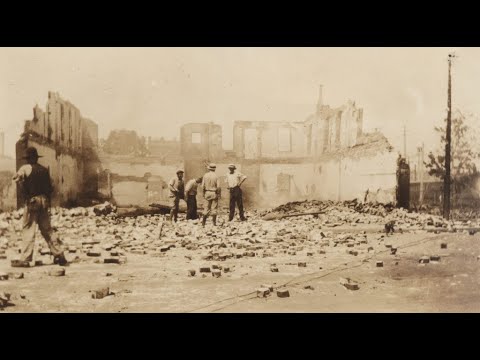 Although rarely mentioned in textbooks, there is no question that the Tulsa Race Massacre was one of the most horrific incidents of racial violence in American history. As the country continues to reflect on the shocking murders and arson that took place from May 31-June 1, 1921, and considers more recent incidents of social injustice like the killing of George Floyd last May, a new documentary Tulsa: The Fire and the Forgotten, premiering Monday, May 31 at 9 p.m. on PBS (check local listings), pbs.org and the PBS Video app, examines this deadly assault on humanity on the 100th anniversary of the crime.

Directed by Jonathan Silvers, and reported by The Washington Post’s DeNeen L.Brown, Tulsa: The Fire and the Forgotten looks back at the explosion of violence when the once prosperous neighborhood known as “Black Wall Street” was destroyed by a mob of white residents. Hundreds of Black-owned businesses and homes in the Greenwood district of Tulsa, Oklahoma, were burnt to the ground, killing an estimated 100-300 Black residents and leaving an estimated 10,000 Black residents homeless. This 90-minute documentary, narrated by Emmy-winning journalist Michel Martin, Amanpour and Company contributor and weekend host of NPR’s All Things Considered, also chronicles present-day public efforts to memorialize the Tulsa Race Massacre and other racial violence around the country, and how Black and white communities view such efforts.

“Stories have power and if they’re told, they can change the future and they can provide some healing. So my goal here would be to finally find answers for some of the descendants of the victims, and if they do find bodies, put those souls to rest,” said Brown. “This spring, the City of Tulsa plans to commemorate the 100th anniversary of the massacre, as descendants of survivors demand reparations for what was lost and protest against current oppression and racism.”

Brown, who was inspired by her own personal connection to Tulsa, investigates the deadly assault and racial atrocity that has gone without punishment by the law as she explores issues of atonement, reconciliation and reparation in the past, present and future through the historical lens of white violence and Black resistance. Brown sits down with descendants of Greenwood residents, business owners and today’s community activists for an honest conversation on the community’s demands for reparations and the efforts to revive the Black district of Greenwood through education, technology, business development and more.

“The Tulsa Race Massacre is an atrocity that is often overlooked in our history,” said Lesley Norman, executive producer for The WNET Group. “With this documentary, we hope to examine the true history of race relations in America while paying respect to the lives lost and celebrating those fighting towards a better future for Black Tulsa residents and for African Americans across the country.”

“The film’s power is in hearing the voices and memories of those whose very existence was redefined by this massacre,” said Eugenia Harvey, executive producer for Chasing the Dream. “The unflinching resilience of north Tulsa’s descendants and residents gives inspiration to all Americans seeking truth in our nation’s history.”

As Tulsa Mayor G.T. Bynum cautions in the film, “It is terrifying because you realize that it could happen today. It is an instance of hatred overpowering the rule of law in a community…I hope that people see that it’s never too late to try and do the right thing. The investigation that we’re doing right now, we shouldn’t be doing it. The city should have done this 98 years ago.…We as a community are trying to do right by our neighbors in 2020 and 21.”

Original Production Funding for Tulsa: The Fire and the Forgotten is provided in part by The Derfner Foundation, A. W. Fong, Joseph and Diane Steinberg, Elaine and W. Weldon Wilson, Carolyn Patty Blum, Darian Swig, Neal and Ashley Robin, the Albert A. Robin Family Foundation, and Craig Mowry. Additional funding is provided by The JPB Foundation and The Peter G. Peterson and Joan Ganz Cooney Fund, in support of Chasing the Dream, a public media initiative from The WNET Group reporting on poverty, justice and economic opportunity in America; and by PBS.

4 replies on “PBS Releases Trailer – Tulsa: The Fire and the Forgotten, Premiering Monday, May 31”