“Keep Shooting: The John Starks Story” tracks his rise through the early days at Central High School and Oklahoma State University to a legendary run with the New York Knicks in the ’90s. From the lows of a crushing game seven loss in the 1993 NBA finals to highs of making the All-Star team and winning the Sixth Man of the Year award, Starks has made Tulsa proud with his on-court success and phenomenal off-court philanthropy through the John Starks Foundation. 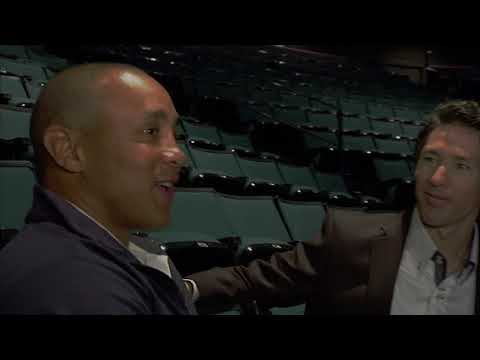 The film documents the unlikely emergence of one of the greatest players in NY Knick history, John Starks. As a young man, Starks progressed from bagging groceries at a Safeway grocery store in Tulsa for minimum wage to clawing his way into the NBA as an undrafted rookie with minimal high school and college playing experience. “The Dunk,” Starks’ game-changing left-handed, soaring slam over Michael Jordan and Horace Grant in a 1993 playoff game against the Chicago Bulls, remains one of the most memorable moments in NBA history to this day.

“It’s crazy, but life is a lot like a game of basketball. You can be a fingertip away from having it all and lose it all in a heartbeat,” Starks said. “When you are at your lowest point is when the most strength is needed. This is when the most important decisions are made: Should you hold back and be contented, or should you get up, dust yourself off, get the ball back in your hands, and keep shooting?”

In 1994 Game 6 of the NBA Finals, Starks scored 16 fourth-quarter points in an attempt to lead the Knicks to a come-from-behind victory over the Houston Rockets and deliver The Big Apple their first NBA championship in 23 years. Hakeem Olajuwon blocked his attempt, closing Starks’ claim to NBA and NY Knick immortality in the final seconds. Following this hair’s-breadth loss, in Game 7, he suffered the worst game of his career, shooting 2-18, and the Rockets won the championship.

Despite the loss, Starks’ career was exemplary. With an NBA 3-point shooting record and an NBA All-star, he bounced back after the 1994 playoffs to win the heralded Sixth Man of the year and be named to the NBA second all-defensive team. He became forever etched in the minds of New York fans for his fiery personality, mental and physical toughness, and dominant perimeter shooting. Starks was inducted into the Oklahoma Hall of Fame in 2011 and now works for The NY Knicks as an ambassador.

Decades later, Starks returns to the scene of the worst moment in his career at the old home of the Houston Rockets, the summit that has now become Lakeview Church, and visits with Pastor Joel Osteen. Starks and Osteen shoot hoops together as they discuss the ways the worst moment in Starks’ career compelled him to soar even greater in the years that followed.

“To have the opportunity to screen ‘Keep Shooting’ in Tulsa and share the experience of John’s life journey with the city he grew up in is very rewarding and meaningful,” Simons said. As President of JD3TV, Simons will also hold a film distribution forum titled “If You Have a Show, We Want to Know.” Tulsa filmmakers are invited to attend on Thursday July 15, 1:30 p.m. to learn about how films and original shows can be green lit for global distribution on JD3TV.

Circle Cinema programmer Chuck Foxen added, “We are honored to welcome John Starks back to Tulsa with producer Leigh Simons. The documentary is an incredible showcase of John’s drive, determination, and never-give-up approach, something that can inspire all Tulsans.”

General admission tickets are $20, with a limited number of VIP tickets available for $1000. VIP tickets include a private red carpet meet-and greet-reception on Thursday July 15, admission to either screening, and an exclusive four-course lunch with Starks and Simons at the Polo Grill on Friday July 16. Tickets are available at CircleCinema.org.

The Circle Cinema Film Festival presented by JD3TV will run from Thursday July 15 to Sunday July 18. For more information about the Festival including additional film screenings, showtimes, and tickets, visit CircleCinema.org or call the box office at 918.585.3456.