Seattle Seahawks veteran wide-receiver Tyler Lockett took an NFL crew to his hometown of Greenwood, Oklahoma, widely known as the home of historic Black Wall Street, for an in-depth look at the history of what was once the most affluent Black community in America.

Lockett described the experience as “life changing,” as he learned from historians what took place over 100 years ago. He also visited the exact spots where those who survived the massacre stood.

“I’ve always said we were so far behind in Tulsa,” Lockett said. “But it’s almost like I want to stop saying it, because we were so far ahead of everybody, and it was taken away from us to where we’re still suffering.”

During the 2021-2022 NFL season, Lockett wore custom cleats in each game, honoring a different part of his hometown on the national stage. In the last game of the season for the Seahawks, Lockett’s cleats gave respect to Greenwood, Oklahoma.

On the custom cleats are the names of the three remaining survivors of the Tulsa Race Massacre; Viola “Mother” Fletcher (107), Leslie Benningfield Randle (107), and “Uncle” Hughes Van Ellis (100). A replica of the Black Wall Street mural found at the Greenwood Cultural Center is also painted on the cleats.

Black Wall Street: Through The Ashes

The NFL sent a crew with Lockett to Greenwood to document the often unheard true story of Black Wall Street, what took place 100 years ago, and what was destroyed. 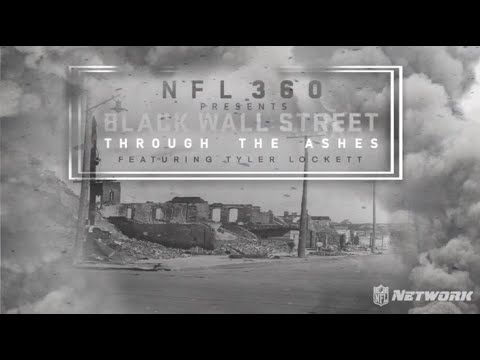 “As you get older, you hear stories–stories about the history and what we once had and everything that took place. Actually being able to dive deeper into it just brought the story to life. Going down, being in the basement, knowing that this is where people were at when there was a fire on the other side of the brick wall, it just kind of brings everything full circle,” Lockett said.

“This was a community that really blossomed into this economic and entrepreneurial hub for Black folks,” said Hannibal Johnson, an author and Greenwood historian. “It was Booker T. Washington who was credited with dubbing the Greenwood district ‘Black Wall Street’.”

A case for reparations

On the morning of May 31, 1921, a White mob torched, dropped bombs from airplanes, and destroyed over 30 blocks of Black Wall Street, killing between upwards of 300 Black residents. The destruction ultimately leveled Greenwood.

Those who did survive were forced into internment camps for weeks after the massacre, living in tents as there were no more standing buildings.

“The city created what we call a ‘campaign of willful neglect’,” attorney Damario Solomon-Simmons said. “In the ‘50s, ‘60s, and ‘70s they wouldn’t pave streets, they wouldn’t provide plumbing, they were able to utilize eminent domain to take the highway and put it right through the heart of Greenwood.”

National Geographic determined in a study that there would be more than $630 million worth of wealth in Greenwood right now had it not been for the massacre.

“No arrests, no convictions, no reparations…that’s what we’re fighting for,” said Solomon-Simmons. “And that’s why I can’t say enough how much I appreciate you using your platform to help us get to your fanbase and your followers to understand that this injustice here in Tulsa is not something that just happened 100 years ago. It’s ongoing to this very day as long as we do not have justice, reparations, and truth,” Solomon-Simmons told Tyler Lockett.