The six-figure donation comes after the company got a first-hand look at the hard work and resources required to sustain an elite HBCU marching band while filming Platinum Sound, the school’s marching band, for a national TV commercial. 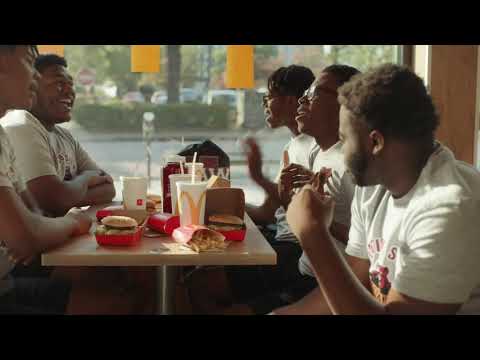 For decades, Platinum Sound Marching Band has been a staple at Shaw University, one of the oldest HBCUs in the nation. To support Platinum Sound’s tradition of bringing joy to sports fans and the local community, McDonald’s USA and its local Owner/Operators surprised the marching band with a $100,000 grant on Feb. 19. It came during the University’s Central Intercollegiate Athletic Association Tournament (CIAA) send-off ceremony.

“This grant is beyond anything we could have imagined,” said Andrae King, current director and former member of Platinum Sound. “It means everything to these students who grind day in and day out to bring energy and excitement to others to get so much love and support back from McDonald’s and the community.

Through the lens of current Platinum Sound member, Dave Walters, Jr. and his mother, a musician and Shaw alumna, the commercial highlighted the local McDonald’s restaurant’s role as a familiar gathering place for Shaw students across generations.

McDonald’s was inspired during filming by Platinum Sound’s commitment to excellence and the University’s unwavering efforts to support these students artistically, academically and financially. Shortly after leaving campus, the brand was moved to further assist these marching band musicians through this grant.

“While I attended an HBCU, it was eye-opening to see the amount of hard work, dedication and resources it takes for a marching band to perform and operate on such a high level,” said Deborah Holder, a McDonald’s Owner/Operator in North Carolina and East Coast Second Vice President of the National Black McDonald’s Operators Association. “As part of the Raleigh and HBCU community, we are committed to ensuring future leaders such as these talented musicians have the tools they need to succeed.”

Shining a light on an HBCU marching band

Pepsi made similar headlines when they highlighted HBCU culture in a first-ever national TV ad featuring an HBCU marching band during the SWAC championship game on ESPN between Prairie View and Jackson State. The ad, called the “Halftime Show”, features FAMU and Jackson State University’s band while highlighting “the electricity and history they bring to game day,” according to a press release from Pepsi.

The funds from McDonald’s will benefit enhancement and expansion goals for the marching band, helping them continue to perform in style. It’ll also provide scholarships to band members, create recruitment opportunities and provide equipment and instruments, such as their sousaphones, which have not been replaced in more than a decade.

This grant is just one of many ways McDonald’s is shining a light on HBCUs and their greatness. The company’s long-standing support of HBCUs includes scholarships, impactful partnerships, sponsorship of HBCU Classics and tournaments, and more.