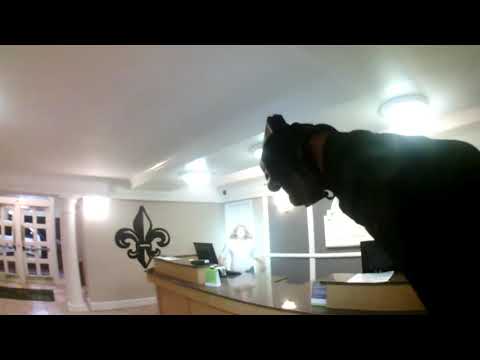 Bossier, La — Officer Patrick Edmonds Jr., the Black police officer, who fatally shot a 45-year-old white woman seen on a viral video yelling racial slurs and threatening to stab him, will not be charged for murder.

Responding to a 911 call at a LaQuinta Inn in Bossie, Louisiana, Officer Edmond found a deranged Shannon Rupert frantically pacing back and forth, while waving a pair of scissors and screaming into a phone.

“You’re going to have to shoot me, n—–r. You’re not taking them. Shoot me,” Rupert shouted. She then walked from behind the lobby desk with the pair of scissors and charged at the police officer.

The Officer Edmond fired two fatal bullets into Rupert. She toppled into a forward-roll and was killed instantly.

After the Bossier Police Department reviewed Edmond’s bodycam footage, he was cleared of all wrongdoing but was placed on temporary administrative leave due to the pending investigation by the Internal Affairs Division.

The victim’s cousin, Melida Peterson, questioned why less than lethal force wasn’t used but admitted that Rupert had a long battle with illegal drug usage.

“I knew she had been into drugs really bad. I tried helping her. I tried talking to her to see if maybe we could get her some help — a recourse. Getting her into rehab or anything like that. She was just out of it,” Peterson told local reporters.